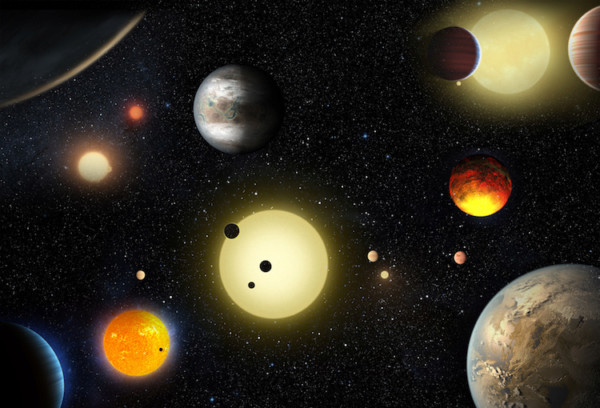 Our favorite space telescope has made headlines once again! Last week, NASA announced the verification of 1,284 new planets discovered by the Kepler mission. It’s the single largest planet discovery to date.

Kepler pinpoints possible distant planets by identifying fluctuations in brightness that occur when planets pass by their stars. From there, these planet candidates undergo further scrutiny to see if they meet the criteria to qualify as an official planet! This discovery is particularly unique in that it marks the first time planet verifications were made based on a “statistical analysis method that can be applied to many planet candidates simultaneously.” Prior to this discovery, new planets were verified one by one, a significantly more time-consuming endeavor.

Another fun fact: a planet candidate earns the status of “planet” if scientists find that the probability of it being a planet exceeds 99%. Candidates that fall below the 99% threshold are then subject to further scrutiny. Out of 4,302 candidates, these 1,284 planets made the cut!

Kepler’s discoveries have been instrumental in furthering educated speculation as to whether or not there’s life on other planets! "Before the Kepler space telescope launched, we did not know whether exoplanets were rare or common in the galaxy. Thanks to Kepler and the research community, we now know there could be more planets than stars,” said Paul Hertz, Astrophysics Division director at NASA Headquarters. "This knowledge informs the future missions that are needed to take us ever-closer to finding out whether we are alone in the universe."

And there you have it, folks: another big STEM win! As the foundation for all STEM fields, math makes it possible for humanity to expand its knowledge of space beyond our solar system. We can’t wait to see what the future holds for space exploration!