News from Mathnasium of

STEM on the Street: An Epic Homecoming for the Last Space Shuttle Tank 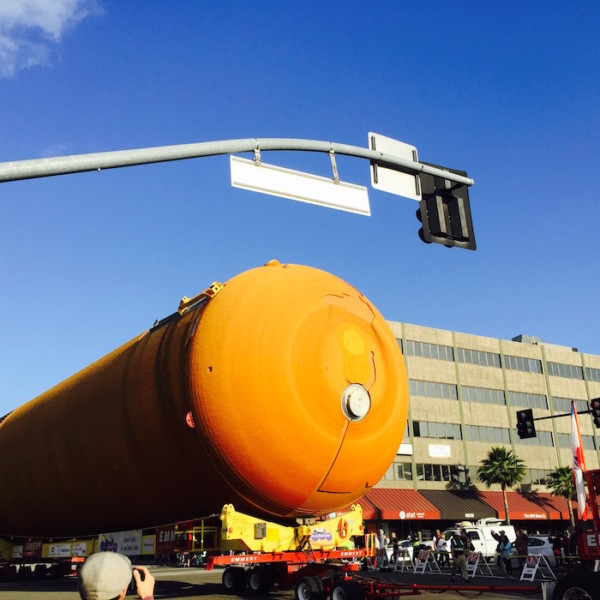 Mathnasium Headquarters is based in Los Angeles, and on Saturday, May 21, we were in for a real treat as the last external space shuttle fuel tank in existence slowly meandered our city’s streets on its way to its new home at the California Science Center!

Dubbed ET-94 (ET = “external tank”), the massive space shuttle tank weighs in at approximately 65,000 pounds and was built as part of NASA’s space shuttle program. It was designed to hold oxygen and hydrogen to fuel engines that boosted spacecraft into Earth’s orbit. These tanks typically fall off or burn up in the atmosphere after a shuttle’s launch and aren’t reused—fortunately, ET-94 was never used in flight and therefore remains intact for all of us to enjoy!

ET-94’s 16-mile slow roll through the streets of Los Angeles was the last leg of its epic 5,000-mile journey. After leaving NASA’s Michoud Assembly Facility in New Orleans, LA on April 13, it sailed on a barge through the Panama Canal, and finally docked at Marina Del Rey, a seaside community in the Los Angeles metro area. Getting an object of this size through Los Angeles’ famously busy roadways was an exercise in planning and logistics in itself (not to mention a major media event), and crowds gathered throughout Los Angeles to cheer on its arrival!

This isn’t the first time an object of this magnitude traversed the streets of Los Angeles. Back in 2012, the retired space shuttle Endeavour flew into LAX on the back of a Boeing 747 and made a similar 12-mile journey to the California Science Center. Fittingly, ET-94 is slated for exhibition alongside the Endeavour, adding a complete set of flight hardware to the shuttle.

The Los Angeles metro area is home to many companies and organizations spearheading amazing innovations in the areas of science and technology (SpaceX and NASA’s Jet Propulsion Laboratory, among others). We can’t wait to see what comes next!