News from Mathnasium of Buffalo Grove

The Fork In The Road

Robert Frost, a famous American poet, wrote "The Road Not Taken" in 1915. It has dazzled and engaged readers ever since. The opening line reads: 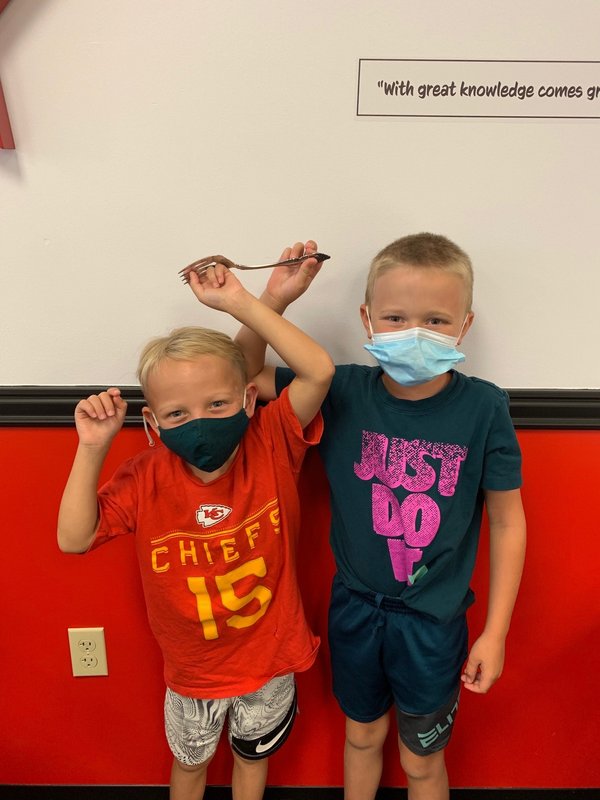 From there, the traveller is confronted with a choice- which path to take. Many times in our lives, we are faced with our own "fork in the road.” Today, I'd like to introduce you to two travellers: two actual people interviewed by Mathnasium, who explained the choice they made when faced with a fork in the road.

Firstly, meet Bethany Ballard, a 34-year old mother of three who met her first "mathematical fork in the road" when she was in 9th grade. She was a great student but often lacked interest in Math. Bethany excelled in English, Art and History but didn't give her Math class the attention it needed.

Eventually, that caught up with her. Bethany realized that she no longer understood Math in her 9th grade Geometry class.  She found that when the teacher called on her, she no longer knew what to say. Shame and embarrassment kept her hand down. She half-heartedly tried to understand her homework, sometimes, enlisting help from her older siblings. Those efforts, though, were inconsistent and lacking. Her math grades became C's while her confidence shrunk.

Bethany never sought out help. She says, "I decided, pretty early on, that I wasn't good at math, and that I'd just struggle through my remaining Math classes until graduation." And that's exactly what she did.

Bethany enrolled in a local community college after she was married and got pregnant with her first child. Math 1010 became her nemesis. She started sabotaging her own chances for success by simply avoiding going to class and missing the tests. Bethany failed Math 1010 and never finished her degree.

Now, let's look at our next traveller, Allison Docks. Allison met her "mathematical fork in the road" in high school when she realized that she needed help with Math. She says, "Math, in general, was always really hard for me." Allison struggled in Math so much that she would try to complete her homework at home, then rip it to pieces and throw it away, instead of bringing it to class to find out where she did wrong.

Things turned around for Allison, just like how things are turning around for kids from Buffalo Grove, Arlington Heights, Palatine, Hawthorn Woods, Vernon Hills, Mundelein when they attend Mathnasium of Buffalo Grove. Allison says, "The best thing that ever happened to me was Mathnasium. I started going there while I was still in high school.  Mathnasium gave me the skills to grow my ACT and SAT scores.”

Before Mathnasium, Allison wasn't so sure about going to college. She says, "I didn't think that A: I could get into a University I like, or B: maintain a degree plan that would actually get me graduated."

But all that changed, when Mathnasium gave Allison the confidence to master Math. Allison was accepted at Mississippi University and graduated in December of 2019. She now works on her dream job in Sports Administration at TCU.

Allison and Bethany both faced the same fork in the road- math ignorance. Mathnasium of Buffalo Grove helped Allison overcome her math weakness. When your child is faced with their own "math fork in the road," we hope you'll turn to Mathnasium of Buffalo Grove. Call us today 847-772-1586. We're ready to get started so sign up now for a Risk-Free Assessment.

My kids both love Mathnasium and enjoying going!
Report a concern
Kristin Berg

The help that my daughter has been receiving is excellent, she feel more comfortable and secure when it comes to algebra. Best decision ever.
Report a concern
Read More Reviews

My kids both love Mathnasium and enjoying going!
Report a concern
Kristin Berg

It was great experience and Mathnasium had helped my daughter to clear all concepts where help is required. it was nice experience. Mathnasium have given extra help where needed to complete the home work as well prepare my daughter for test.
Report a concern
Shalinder Dadoo

Cheyenne’s scores at school have improved considerably and her fear and hatred of math has completely disappeared! She also loves her mathnasium sessions!
Report a concern
Wissam Moussa

My daughter have a great experience at Mathnasium, great tutors that help her to better understand and apply the knowledge at school. Her grades improved at school. I’m very happy for her, enrolled her at Mathnasium is the best that I could do for her.
Report a concern
S.D.

It is helpful teaching methodology for student ( middle School)
Report a concern
M.J.B.

It helps myson improve his grade in math
Report a concern
S.D.

I like the individual attention and the ability for the teachers to address and answer questions immediately.
Report a concern
Carolin Klingbeil

There is no way for parents to know the progress. I don’t see any parents portal anywhere. My son gets bored some days because he is doing same pages day over day, May be switching to different type of math problems help. Other than these small issues we love the program and teachers.
Report a concern
S.C.

Payton has not only grown through Mathnasium but has developed better study habits.
Report a concern
Maia Singleton

We had a great experience and it was beneficial for our child.
Report a concern
T.B.

Jason is a fantastic math tutor. He is very patient with the students he works with and extremely knowledgeable in many levels of math. My son thoroughly enjoys the time he spends with Jason and finds the sessions extremely beneficial.
Report a concern
Agnieszka Gawor

Julie and Jerry have been wonderful. They answered all the questions I had regarding their program for my son. Both are quick to return calls when I've left a message. The teachers that my son has worked with have been friendly and helpful. My son was not thrilled about learning math over the summer but that has changed since he has been going to Mathnasium. Thank you!
Report a concern
Rohinn Ganesh

Mathnasium is helping my daughter build her knowledge and skills around math. She is learning how to master the skills and apply them. I see that she is able to do computations much better than before especially with counting, fractions, basic math etc. She is more confident she will handle Algebra which is a new addition for her this school year. I also get reports in email about mastered and in progress skills. Overall I'm very happy with Mathnasium.
Report a concern
Rohinn Ganesh

My daughter has gained more confidence after joining mathanisium. she feels more confident than before about topic expertise and is better equipped to solve problems. I would recommend mathanisim to parents like myself who have a very busy work and travel schedules.
Report a concern
S.R.

My daughter is very shy and afraid to ask questions. Mathnasium has helped her a lot with the basic Math skills and in opening upto teachers and asking if she needs help. Willd efinitely recommend it to other parents looking for Math help for their kids.
Report a concern
M.W.

It is a great place, very nice and helpful staff!
Report a concern
A.P.

We really like your program, both of my children like to go to your center, however it would be really helpful to expand Mathnasium hours especially weekends, even if it is every other weekend .
Report a concern
Santosh Singh

Mathnasium instills confidence in a student and the teachers do it in a methodical manner.
Report a concern
Vidya R Ramachandran

Finally, my daughter does not hate math anymore. She actually looking forward to go to mathnasium. Funny. In the past, it’s like pulling teeth. The best thing is, with mathnasium she is understanding the math concept and now started to enjoy it.
Report a concern
Response From Mathnasium of Buffalo Grove
WOW! This is fabulous to hear! We could not have done this without your commitment and support! We are so proud of our students and how hard they work after putting in a long day at school and coming in extra on the weekends. Getting to true understanding is a game changer! Glad we can be a part of her success!
S.S.

I have already referred Mathnasium to friends. This center allows for effective baseline assessment and reinforcing fundamental concepts. My child really has gained significant confidence.
Report a concern
V.R.R.

It is a good resourse. My son is happy solving math.
Report a concern
T.P.

its been great. Only problem is its just a bit faraway from the residential areas of buffalo grove, Lincolnshire and lake forest and many of my friends says its too far from there .
Report a concern
P.T.

LOVE Mathnasium. The people and environment is so inviting and Lily has learned a ton! Sahar is the best!! Thanks for all you do.
Report a concern
A.I.

Sahar rules! I love how invested she is with the students and makes everyone feel at home. Lily loves all the teachers and connects with them all. She finds their way of teaching to make math less intimidating.
Report a concern
D.J.

My kids are always happy to spend their time in Mathnasium.
Report a concern
P.T.

My daughter Lily LOVES Mathnasium. She was not a fan of math but asks to go and learn now! The people are so nice and they make Math fun!!
Report a concern
A.I.

My kids enjoy it very much.
Report a concern
L.L.

My daughter actually seems to look forward to going there. She likes all the teachers and feels good there. Starting to gain confidence in math.
Report a concern
N.A.

My daughter had fun learning math, that's the most important.
Report a concern
D.J.

Sydneys grades are improving. It would be helpful if you had Saturday hours and open earlier on Sundays.
Report a concern
Christina Moriarty

I think Julie is fantastic and communicates beautifully with families in her program.
Report a concern
L.L.

Teachers are very friendly
Report a concern
Response From Mathnasium of Buffalo Grove
Thank you for the kind words -- we love working with all of the kids in our center!
M.T.

Sam, Julie and other teachers are very cooperative and accommodative
Report a concern
Response From Mathnasium of Buffalo Grove
Thank you. Your children are a pleasure to have in the center!

Three Things You Can Count On From A Mathnasium Instructor

Hello and welcome to the wonderful world of Mathnasium! Today we're going to highlight a...

According to research from EAB, next generation's jobs will have a common threa...