Cherry Hill / News / Did you know how much Math is there in Sports?
Math on the Field, Operation Mathlete

Did you know how much Math is there in Sports? 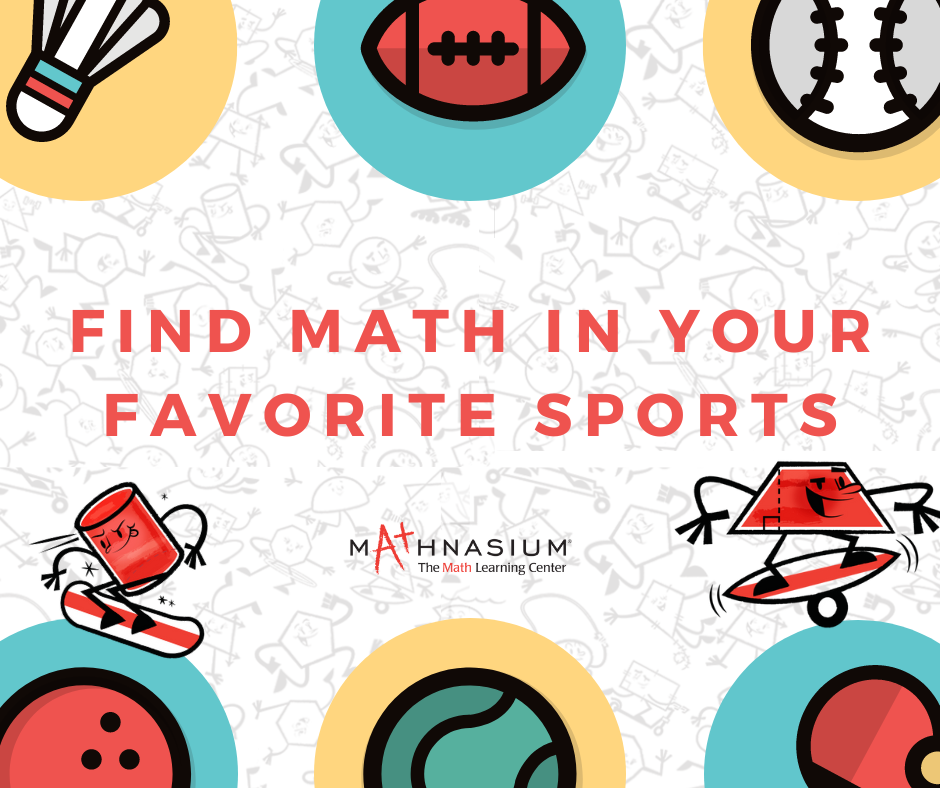 Sure, we use math in commerce and business but we also use it in a variety of ways in sports, including analyzing statistics of games and players and measuring ball kick trajectory & lung volume. There are a variety of situations where working mathematically is needed in sports; percentages, velocity, acceleration, measurement skills, volumes, graphs, tables, and more! Here are a few examples of ways we use math in sports.

Timing using stopwatches: We use stopwatches to record the times of some runners over several events (100m, 200m, 400m). This data from each runner can be used to determine how fast a given runner was compared to another using percentage, e.g. student A was 5% faster than student B. You could also look at each runner’s velocity by dividing the distance by the time recorded (v = d/t). The velocity data can then be compared across the different events… How much does velocity change for each runner from short to longer distances?

Angles: Angles can be found in many other sports, particularly in their techniques. When throwing a javelin or kicking a ball, what is the optimum angle? Set up a smartphone or tablet and record the students throwing or kicking an object using an app like Angles or Angulus. After recording the distance the object traveled, we look at the initial angle at which the objects were kicked or thrown. Which angle produced the furthest distance? What sources of error are there in this test? Coaches use this data to help athletes improve.

Scorekeeping:Basketball and Baseball are both games with lots of scoring attempts. Math is used to calculate shooting averages and batting averages.. Using batting scores at different points during a game, you can actually calculate possible outcomes for future games!

Shapes and Formations: Football coaches often use formations to describe how their team should line up when coaching a team. Each of these formations is a version of geometric shapes. Mathematics can be applied to sports in many ways, including triangles to describe how players should position themselves so that their teammates can pass the ball to them in three ways.

Fractions in Sports: During a team game, there are innings, sets, quarters, and so on. This is fractions at work. Fractions are also commonly used to divide up the fields.

When watching your next sports game see if you can pick out all the ways that mathematical concepts are being applied to the game and how important they really are.

Fractals are known as geometric shapes that display similarity through their full range of scale—that is, they look the same no matter how big or how small they are. It’s pretty cool when you think about it and even cooler when you realize that they are found everywhere in nature! Read this article to learn more about Fractals found in nature.

Math On The High Seas

Without math, would our seafaring ancestors ever have seen the world? Great mathematical thinkers and their revolutionary discoveries have an incredible story. Explore the beginnings of logarithms through the history of navigation, adventure, and new worlds in this blog: “Math On The High Seas”

The Golden Ratio in Everyday Life

This ideal ratio is used by many because of its apparent lure to the human eye. The Golden Ratio has been said to be the most appealing ratio and is therefore used frequently. Everything from commercial advertising companies, to painters, to even doctors incorporate this 'magical' ratio into their work.Learn more about the golden ratio in this blog