Clayton Ladue / News / Pi day: a brief history of our fascination with this magical number, from pies to â€˜piemsâ€™
General

Pi day: a brief history of our fascination with this magical number, from pies to â€˜piemsâ€™

Pi day: a brief history of our fascination with this magical number, from pies to ‘piems’

You will discover that the ratios of the circumference to the diameter in both cases are remarkably close to each other. If you decide to experiment with other circular shapes, you will find that no matter how large or small the objects are, as long as they are round, the ratios will all be very close to 3.14. You just stumbled upon a universal law of circular objects.

The Greek letter pi (π) was introduced in 1706 to denote that constant ratio between the circumference of a circle to its diameter. But the fascination with the number pi goes back millennia.

While pi exists through the constancy of the result of dividing circumference by diameter for all circles, it’s important to note that this constancy is not quite as universal as the ancient Greeks thought. For circles drawn on curved surfaces, such as the spherical surface of Earth, the division is not constant at all, and pi ceases to exist.

Flat geometry, also known as Euclidean geometry, is the universe of mathematical objects where pi exists. The ancient Greeks only studied flat geometry and so for them the constant pi was truly a universal wonder whose precise value they sought to pinpoint. Being just a simple ratio, how hard could it be?

Archimedes placed pi between 223/71 and 22/7, so between 3.140 and 3.142, while Ptolemy found the first approximation correct to three decimal places: 3.141. Improvements to seven decimal places were achieved by Chinese mathematicians in the 5th century AD, based on a new technique discovered in the 3rd century by mathematician and writer Liu Hui. A millennium would pass before further significant advances led the 14th century Indian mathematician Madhava of Sangamagrama to reach 11 decimal places.

Progress accelerated with better analytical tools. With modern computers, as of August 2021, the record stands at 62.8 trillion digits.

As the knowledge of the digits of pi expanded, people tried to detect a pattern. A simple rule to describe all digits in one go, or to pinpoint pi, as the ancient Greeks had hoped to do. However, in the 1760s, the French-Swiss mathematician Johann Heinrich Lambert proved that the decimal expansion of pi does not follow any simple rule for its digits; pi is irrational, meaning that its decimal expansion does not repeat or terminate.

The number pi is simple to define and captures a fundamental geometric fact. At the same time, computing it was a challenge for some of the best mathematicians who ever lived. In a sense, it can never be fully captured by simple computations. These factors contribute to the allure of pi and are perhaps a source of its ongoing influence on our culture. 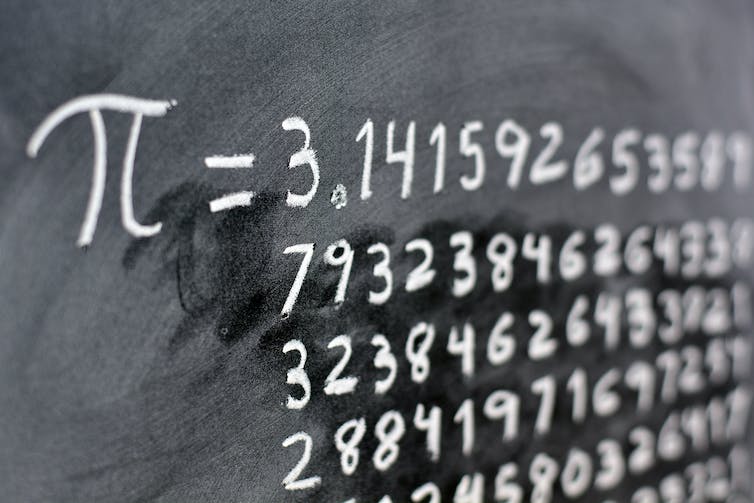 I wish I could determine pi

Is the problem’s very centre.

If you count the letters in each word, you’ll get 3.14159265358979323846, which is pi correct to 20 decimal places. This is an example of a “piem”. There are many more piems in English, as well as in various other languages. A piem can be both a mnemonic device (a linguistic tool to help us remember something) and an artistic endeavour.

This literary style, where the number of letters in consecutive words is dictated by the decimal expansion of pi, is called “Pilish”, and has been around since the early 1900s. Beyond short poems, Pilish has given rise to longer pieces of prose, and even an entire novel. Author Michael Keith indicates the first 10,000 digits of pi through a book, titled Not A Wake (as you can see, its title encodes 3.14).

If you’re feeling creative and want to test your Pilish, here is a Pilish checker you can use. Alternatively, eating pie isn’t a bad way to celebrate all things fascinating about pi.

CAN WE REWIRE OUR BRAINS TO BE MORE FLUENT IN MATH?

The problem with focusing relentlessly on understanding is that math and science students can often grasp essentials of an important idea, but this understanding can quickly slip away without consolidation through practice and repetition.

Why Claude Shannon Would Have Been Great at Wordle