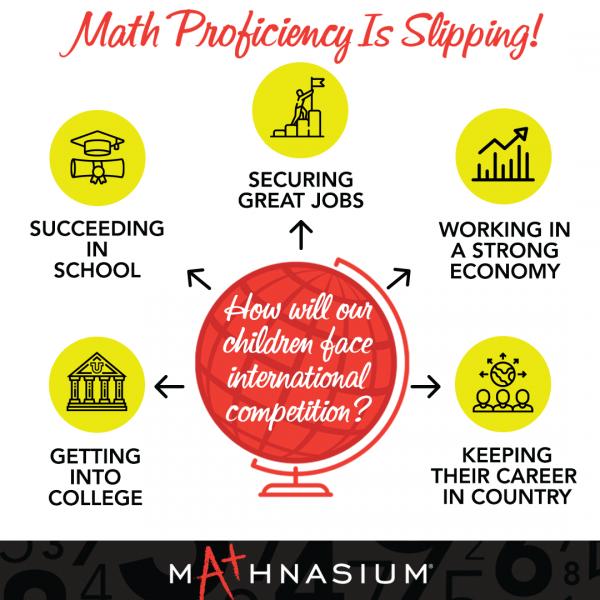 Our children’s long-term success depends on their ability to compete and collaborate with people around the world. There is one language they will all need to use, and it’s not English: It’s math. Unfortunately, the difference between U.S. students’ math skills and those of their global peers is consistently alarming. The most recent Programme for International Student Assessment (2018) ranked U.S. students below the middle of the pack in math proficiency1 — as it has for years.

What Kinds of Competition Will U.S. Kids Face?

Ready or not, our students are growing up in an increasingly competitive world — one for which many other countries are better prepared because they strongly emphasize math competency. What’s more, the pandemic placed a new burden on our students, making it an even greater challenge to compete with their international peers in math.

The number of international students in the U.S. is at an all-time high. Students from math-proficient countries make up the largest percentage.

Our labor force is international; the best companies employ people with the highest knowledge and skill levels, no matter where they live.

Working in a strong economy

To avoid having their jobs move offshore, U.S. workers must maintain their edge.

The problem is thrown into especially stark relief when considering the skyrocketing number of U.S. job openings in science, technology, engineering and math. As the foundation for all STEM subjects, math is the key to entering these careers.

Missing Out on the STEM Revolution?

Since the late 1990s, the U.S. has been unable to fill STEM-related business and academic positions with domestic talent, so it has been tapping foreign personnel in greater numbers. The disparity between the number of openings and qualified applicants is now at crisis levels.

U.S. federal and state governments, private industry and nonprofit organizations have been throwing research and money into K-12 math and STEM curriculum and programs, hoping to improve math competency and encourage students to pursue STEM majors in college and STEM careers upon graduation.

But attempts to build a STEM pipeline are hampered by myriad problems, including overcrowded K-12 classrooms, a one-size-fits-all math curriculum, and a chronic shortage in K-12 math and science teachers, among other factors.

U.S. students therefore aren’t choosing STEM-related majors in sufficient numbers to move the needle. As a result, it’s estimated that the BRIC countries (Brazil, Russia, India and China) will produce 75 percent of global STEM graduates by 2030, with the U.S. producing only four percent.2 Already, both undergraduate STEM-related majors and graduate programs could not be maintained at many U.S. universities without international students.3

Repetitious Drilling Is Out; True Comprehension Is In

Another commonly held misconception, by both children and parents, is that math is primarily about the ability to calculate. Although that was never actually the case, technology has made it even less so.

The mechanics of math are becoming less important for humans … But a deep understanding of mathematical ideas and principles, and our capacity to think like mathematicians, are becoming more important. Because without that capacity, we will be unable to navigate the data, numbers, graphs or diagrams around us. — Andreas Schleicher, Director, OECD Directorate for Education and Skills

From supercomputers running Big Data analysis to phone apps that calculate restaurant tips, we rely far less on our ability to perform calculations than in prior decades. Instead, computational thinking is the bellwether of success.

Math Tutoring is Part of the Remedy

Much of what our children still learn in school — and are tested on — is their ability to calculate. That won’t be enough to make them successful in the global digital economy. So increasingly, parents who recognize the importance of math and STEM to their children’s future are choosing to supplement their child’s classroom math education during the K-12 years.

But not all math tutoring programs will take children to the finish line. Stories abound of children who learn to crunch numbers but haven’t internalized the fundamental understanding that builds the foundation for true math comprehension and achievement. Therefore, it’s critical that parents evaluate programs for their ability to make math comprehensible in a way that builds foundational knowledge and that matches their child’s individual learning style. This creates an enthusiasm for math learning rather than a resistance to math and math-related academic subjects and careers.

Equally important is that a math-tutoring program teaches children to think critically and to solve problems independently — skills they’ll use in every area of their lives, forever.

Tomorrow’s workers — today’s children — will need critical thinking and problem-solving skills to compete globally and to address serious issues in a world whose only constant is change. By learning and growing confident in math, they can be ready to take on the world.

Summer is a great time to keep the momentum of math going! We offer a flexible summer math program at Mathnasium Gaithersburg. You can choose from 10, 20, or 30 Summer Sessions Package!  We will work with you to find a time that works best for..