News from Mathnasium of Tyrone 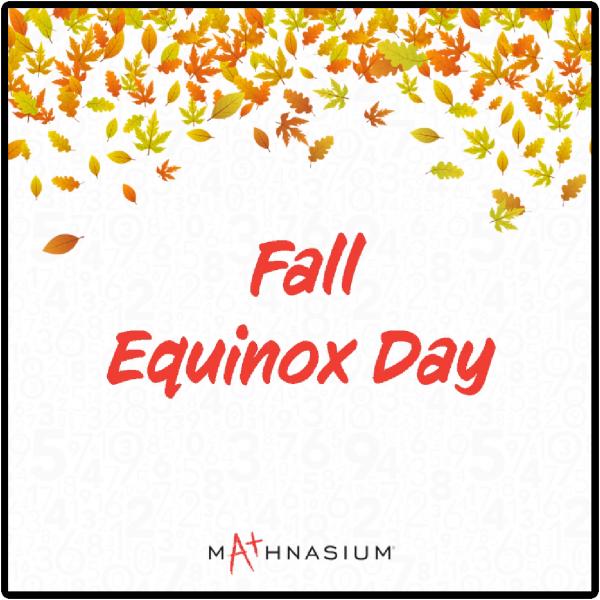 Back-to-school season is upon us, and with it comes the end of summer. To make it official, today we are celebrating the Fall Equinox!

Also known as the Autumn Equinox, September 22, 2021, marks the First Day of Fall. But what does this mean?

Let’s start with some basics about Earth.

Earth is split into two hemispheres, North and South.

A hemisphere is half of a sphere. Earth’s hemispheres are divided by the equator, defined as a Great Circle located at 0-degrees latitude.

Earth spins on a tilted axis.

“An axis is an invisible line around which an object rotates (or spins). The points where an axis intersects with an object’s surface are the object’s North and South Poles.”1 Rather than spinning on a 0-degree tilt, the Earth’s axial tilt is about 23.5 degrees. Earth completes one full spin about its axis in 24 hours, giving us day when the Northern Hemisphere faces the Sun and night when facing away from the Sun.

Earth rotates around the Sun on its axial tilt.

All of this brings us the Equinoxes. The lengths of our days and nights are not usually equal except for two days in a year: the Spring and Fall Equinox Days. Equinox stems from the Latin words for “equal” (aequus) and “night” (nox). During the 24-hour day on the two Equinoxes, we can expect roughly half of the day (12 hours) to be day and the second half of the day (another 12 hours) to be night.

Officially, the Equinox marks the moment when the Sun is in line with the equator, representing for us an official change in season. When an Equinox happens, the dividing line between the light and dark parts of the Earth extends directly through the North and South Poles.

So, does everyone across the world celebrate the first day of Fall today?

How do you and your family celebrate the change in season?

Thanks for all you’ve done for my daughter. Her confidence has improved so much now that she understands math!
Report a concern
Read More Reviews

Thanks for all you’ve done for my daughter. Her confidence has improved so much now that she understands math!
Report a concern
Tamra Pierce

Our son enjoys his time at Mathnasium, the coaches make his time there fun, a one on one experience where they go at his pace. A great way to learn!!!
Report a concern
D.G.

We’ve been happy with our summer sessions. So much so that our youngest also comes for sessions now. We feel that these summers fully prepare them for what they will see in the upcoming school year and keeps their skills sharp during the break. Communication is good as we are kept up to date on what the boys are working on and we are happy with the student to tudor ratio.
Report a concern
R.F.

THEY HAVE HELPED MY DAUGHTERS IMPROVE IN MATH
Report a concern
R.P.

My son enjoys going to mathnesium. His math really improved since he started the program.
Report a concern
James Riley

Our granddaughter, (who is currently in the 4th grade & back to a brick and mortar school for this year 2[PHONE NUMBER REMOVED]) had received a "D" in both Math and Science on her first report card. Because of the schools going remote learning the last 12 weeks of her 3rd grade level, she fell behind in both subjects. Since attending Mathnasium's tutoring sessions her Math grade is now at an "A" level. As is her science grade too. We believe the Math she is learning at Mathnasium has helped her immensely in both subjects. She looks forward to her sessions and with no burnout. She says the time flies and that her session is over before she knows it.The instructors take their time in explaining the math concepts and it is with great pleasure to see her face light up when she "gets it". We are updated on her progress frequently and the change in her grades has been tremendous. We highly recommend Mathnasium's program.
Report a concern
S.R.

My daughter has gotten 100% on her last two math tests. This never happened before Mathnasium. Thank you! Yesterday she told me she didn’t want to leave! She actually enjoys math now and understands the concepts. Thanks, Mathnasium, you changed our life!
Report a concern
C.S.

My daughter is definitely getting more confident in her math skills: I’m very pleased.
Report a concern
R.F.

My daughter's love it.
Report a concern
David Thompson

My two (2) granddaughters have been going to the Mathnasium for assistance for over three (3) years starting at 4th Street in St. Petersburg and continue at Tyrone which is nearer their home. They actually love going there! Kids and Math? Yes! I am a retired electrical engineer trained in the "slip-stick" (slide-rule) era without digital assistance other than some boolean algebra. The methods and routines the Mathnasium provides are outstanding, in my opinion, and the grandchildren's grades in Middle and High Schools shows it! Highest recommendation!
Report a concern
David Thompson

The staff at Mathnasium has helped our daughter immensely. Not only is she excelling at math, but she enjoys it. Given a choice between going home, or going to Mathnasium, when picked her up from school, she always wants to go to Mathnasium. The program, and staff, have far exceeded our expectations.
Report a concern
D.G.

This is the second summer for my son who loves math. He likes going to class and it really prepares him for the upcoming year. I like the student to teacher ratio and the summer package option.
Report a concern
K.M.

My daughter has been receiving tutoring at Mathnasium Tyrone for one month. She scored higher on her standardized math test as a direct result of the help they offered.
Report a concern
J.C.

My son enjoys tutoring especially his tutor who is very knowledgeable and accommodating. He is really learning and understanding his math work now.
Report a concern
J.M.

The Director and instructors are caring and focused on each student having a successful learning experience.
Report a concern
Devin Payne

This place was awesome and amazing! Right staff and very helpful. They helped my daughter and it helped her to be there but unfortunately dont have the money to stay.
Report a concern
David Thompson

Mathnasium has helped our 12 year old daughte, with Algebra, a great deal. She also really enjoys it. I personally like how the one hour sessions are structured -1/2 hour on generally proficiency and the second half hour focused on her schools homework/current studies. The fact our daughter can start her one hour sessions at anytime makes it very convenient. The only negative is limited operating hours. It would be very helpful, for our family, if Friday’s were a option. Even Sunday evenings. Also, some holidays and school breaks. The limited availability makes it difficult for us to get our money’s worth.
Report a concern
M.M.

I love that fact that my sons gets excited about math when I take him to mathnasium. I like the educational, supportive atmosphere. The director Laura is so kind, helpful, and knowledgeable. I will recommend Mathnasium to my friends and family.
Report a concern
J.G.

My daughter loves Mathnasium. She has never felt more confident. Ms. Laura Y. and her staff at our location is friendly,helpful and attentive.
Report a concern
D.C.

Every one very nice
Report a concern
Drew Beierlein

Jaiden loves every experience with Mathnasium. All tudors are great and make his experience enjoyable and leave him wanting to come back. I am thankful for the confidence building and the smiles Jaiden comes home with. He is improving in his algebra 1 honors class and he would not be if not for joining Mathnasium. This is an extra expense and did not fit in our budget at the time of enrollment, but it is worth every dime knowing my son is gradually comprehending this difficult course, with a new smile. Thank you all at Mathnasium for helping in this desperate time as you were there when we had lost hope. You have brought smiles back to our home and greatly reduced our stress. We highly recommend your program to all who ask. Not enough positives to say, but who else wants to learn over Thanksgiving break? My son wants to go to Mathnasium on his vacation. Words I NEVER thought I'd hear.
Report a concern
Monique Graves

My twin senior high schoolers love the instruction and are getting a lot out of their lessons ! I’ve already been referring people to you for math !! Thank you ! Monique G
Report a concern
C.K.

Laura is awesome and she really takes the time to understand the kids and their needs.
Report a concern
M.G.

Grayson enjoys going, the staff are friendly and willing to help him learn new things and the hours are convenient.
Report a concern
Mohan Govindaswamy

Friendly faculties and constructive environment to learn Math for the kids.
Report a concern

One way to test if a three-digit number is divisible by 11 is to follow the 3-digit rul...

Back-to-school season is upon us, and with it comes the end of summer. To m...

Why Your Child Needs Math More Than You Think

The language of the universe, math is omnipresent and unavoidable — and that’s a good...