The Most Irrational Number

The Most Irrational Number

The golden ratio is even more astonishing than Dan Brown and Pepsi thought. 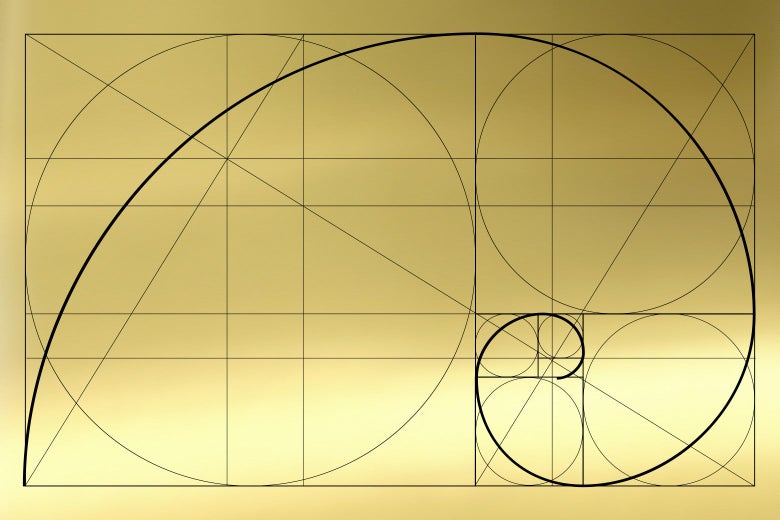 One of the great charms of number theory is the existence of irrational numbers—numbers like the square root of 2 or π that can’t be expressed as the ratio of any two whole numbers, no matter how large. The legend goes—probably false, but hey, it makes a point—that the discovery of the irrationality of√2 was so disconcerting to the Pythagoreans, who wanted all numbers to be rational, that they threw the discoverer into the ocean.

Among the mysteries of the irrationals, one number holds a special place: the so-called golden ratio. The golden ratio’s value is about 1.618 (but not exactly 1.618, since then it would be the ratio 1,618/1,000, and therefore not irrational) and it’s also referred to by the Greek letter φ, which is pronounced “fee” if you’re a mathematician and “fie” if you are in a fraternity. If you want an exact description, the golden ratio can be expressed as (1/2)(1+√5.)

People have been making a fuss over this number for centuries. In Euclid, the proportion goes by the more mundane name of “division into the extreme and mean.” He needed it to construct a regular pentagon, since the golden ratio is the proportion between the diagonal of such a pentagon and its side. A golden rectangle is one whose length is φ times its width; it has the agreeable quality that if you cut it crosswise so that one of the two pieces is a square, the other one is a smaller golden rectangle. 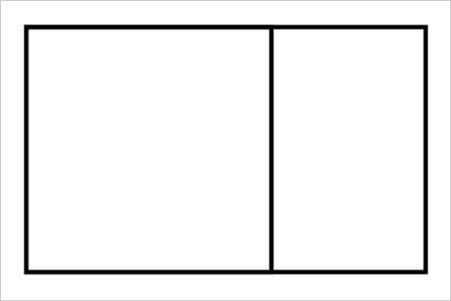 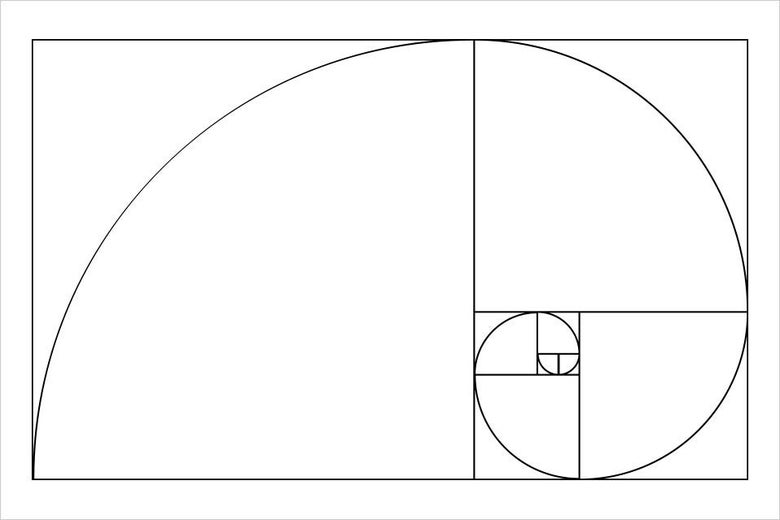 The golden ratio doesn’t arise only in geometry; in the Fibonacci sequence, where each number is the sum of the two previous ones (1, 1, 2, 3, 5, 8, 13, 21, 34, …), the ratios between consecutive terms approach φ more and more closely as the terms get larger and larger. (But of course those ratios never arrive at φ, because, again, irrational!)

There’s been a miasma of mysticism around the golden ratio for a long time. The number theorist George Ballard Mathews was already complaining about it in 1904, writing that “the ‘divine proportion’ or ‘golden section’ impressed the ignorant, nay even learned men like Kepler, with a sense of mystery, and set them a dreaming all kinds of fantastic symbolism.” Figures with lengths in golden proportion to one another are sometimes said to be inherently the most beautiful, though the claims that the Great Pyramid of Giza, the Parthenon, and the Mona Lisa were all designed on this principle aren’t well substantiated. An influential 1978 paper in the Journal of Prosthetic Dentistry suggests that a set of false teeth, for maximum smile appeal, should have the central incisor 1.618 times the width of the lateral incisor, which should in turn be 1.618 times as wide as the canine. There’s a small but persistent school of financial analysis which holds that the golden ratio governs fluctuations in the stock market; your Bloomberg terminal, should you be flush enough to have one, will draw little “Fibonacci lines” on the stock charts for you.

One day in the ’90s, I had dinner with a friend of a friend at the Galaxy Diner in New York. He said he was making a movie about math and wanted to talk to a practitioner about what the mathematical life was really like. We ate patty melts, I told him some stories, I forgot about it, years went by. The friend of a friend was named Darren Aronofsky, and his movie Pi came out in 1998. The main character of the movie is a number theorist named Max Cohen who thinks extremely intensely and twirls his fingers in his hair a lot. He meets a Hasidic man who gets him interested in Jewish numerology, the practice called gematria where a word is turned into a number by adding up the numerical value of the Hebrew letters it contains. The Hebrew word for “east” adds up to 144, the Hasid explains, and “the Tree of Life” comes to 233. Now Max is interested, because those are Fibonacci numbers. He doodles some more Fibonaccis across the stock market pages of the newspaper. “I never saw that before,” says the impressed Hasid. Max feverishly programs his computer, which is named Euclid, and draws golden rectangle spirals, and stares for a good long while into the similar spirals of milk in his coffee. He computes a 216-digit number, which seems to be the key to forecasting stock prices and is also possibly God’s secret name. He plays a lot of Go with his thesis adviser. (“Stop thinking, Max. Just feel. Use your intuition.”) He gets a bad headache and twirls his hair even more intensely. The beautiful woman in the apartment next door is intrigued. I forgot to mention it, but this movie is in black and white. Somebody tries to kidnap him. Finally he drills a hole in his own skull to let some of the math pressure out and the movie arrives at what appears to be a happy ending.

I don’t remember what I told Aronofsky about math, but it wasn’t that.

Golden numberism really took off in 2003, when Dan Brown published his megahit novel The Da Vinci Code, the story of a “religious symbologist” and Harvard professor who uses the Fibonacci sequence and the golden ratio to unwind a conspiracy involving the Knights Templar and modern-day descendants of Jesus. After that, “put a φ on it” was just good marketing. You could buy jeans whose golden proportions were flattering to your rear (they go with your false teeth!). There was a “Diet Code,” which argued that Leonardo would have wanted you to lose weight by eating proteins and carbs in golden-ratio proportions. And there was perhaps the greatest work of mystical geometric hoo-hah ever produced: the Arnell Group marketing firm’s 27-page explanation of the new Pepsi “globe” logo it designed in 2008. The document was titled “BREATHTAKING.” The pitch explains that Pepsi and the golden ratio are natural partners, because, as you no doubt knew, “the vocabulary of truth and simplicity is a reoccurring phenomena in the brand’s history.” A timeline situates the unveiling of the new Pepsi logo as the culmination of 5,000 years of science and design including Pythagoras, Euclid, da Vinci, and somehow the Möbius strip. The new Pepsi logo would be built out of arcs from circles whose radii were in golden ratio to each other, a ratio that the pitch declares would now, in a truly impressive rebranding bid, be known as “the Pepsi Ratio.”

What can that mean? Either a number is the ratio of two whole numbers or it isn’t*.

It turns out that there are ways to talk about how irrational an irrational number is. After all, the fact that a number like φ is irrational doesn’t mean there aren’t rational fractions very close to it. Of course there are! A decimal expansion, after all, is a way of writing down fractions that are close to a number:

We can do better than decimals! Remember, the ratios between Fibonacci numbers are also fractions that get closer and closer to the golden ratio:

Go farther in the sequence and you get to:

Some celebrity irrationals can be approximated even more closely. Zu Chongzhi, a fifth-century astronomer in Nanjing, observed that the simple fraction 355/113 is incredibly close to π, only about 2 in 10 million away. He called it miluÌˆ (“very close ratio”). Zu’s book on mathematical methods is lost, so we don’t know how he came up with the miluÌˆ. But it was no simple find; it would be 1,000 years before the approximation was rediscovered in India, another 100 before it was known in Europe, and another century after that before it was conclusively proved that π was actually irrational.

One way to get a sense of how well a number can be approximated by rationals is by drawing a kind of picture I like to call a “barcode.” Here’s how you make one: If x is a number, look at the first, say, 300 multiples of x—x, 2x, 3x, 4x, and so on—and for each of those multiples, you make a little vertical tick mark at its “fractional part,” which is the part of the number after the decimal point. That is, it’s a number between 0 and 1; the fractional part of φ, for example, is about 0.618. 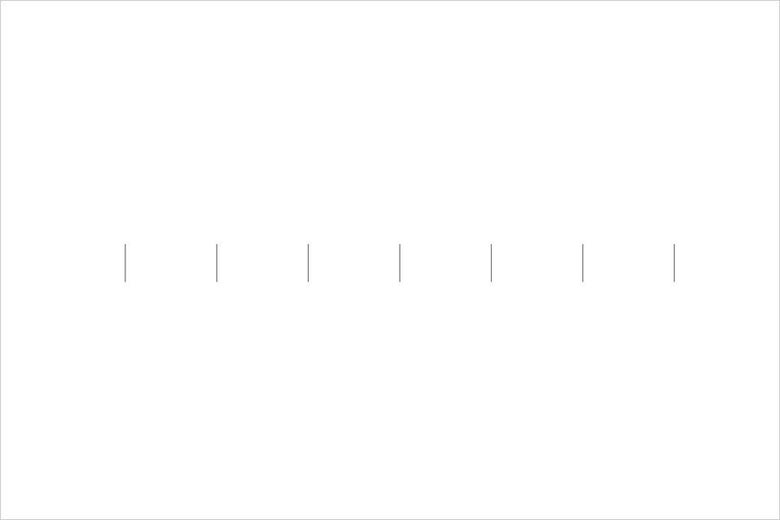 It’s the same for any rational number; we may consider more and more multiples, but the bars will be constrained to a finite collection, evenly spaced from 0 to 1.

What about π? Here are its first 300 multiples: 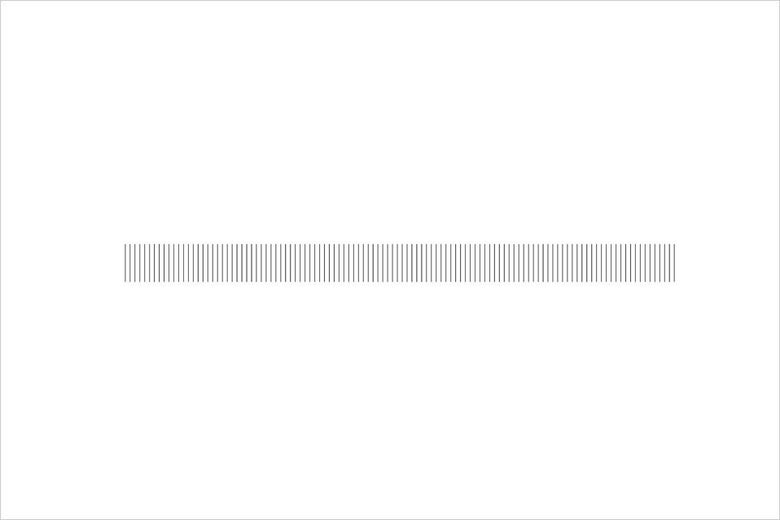 That’s a lot of bars. But not 300. In fact, if you were to count the bars visible here, you would see that there are exactly 113 of them. What you’re seeing here is the signature of the miluÌˆ. Because π is so very close to 355/113, its first three hundred multiples are also very close to some number of 113ths, which means those bars are going to stay very close to the numbers 0, 1/113, 2/113, (pretend I wrote down all 113 possibilities), and 112/113. Since π isn’t exactly equal to the miluÌˆ, its multiples don’t hit those fractions on the nose; the bars in the picture that look a little fatter and darker are those that are actually several bars clustered so close together they look like one on the page.

Which brings us back to the golden ratio. The bar code formed by the first 300 multiples of φ is nicely spread out, not clustered like the π bars: 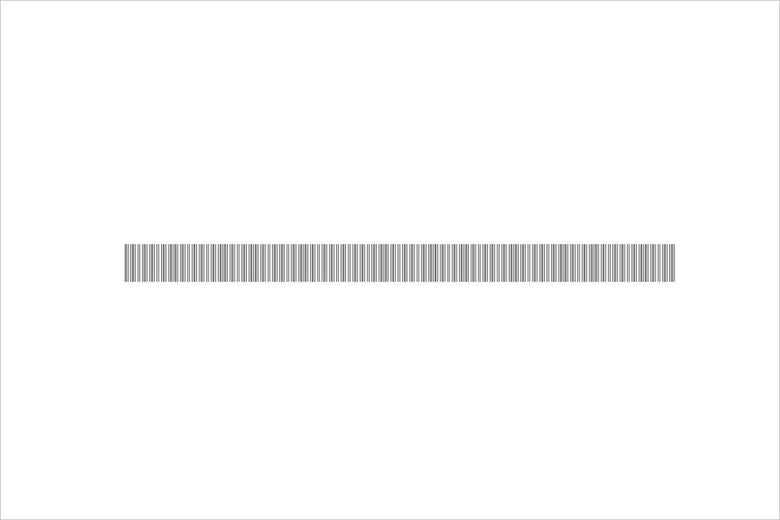 Draw a thousand multiples, and it’s the same story, just with more bars: 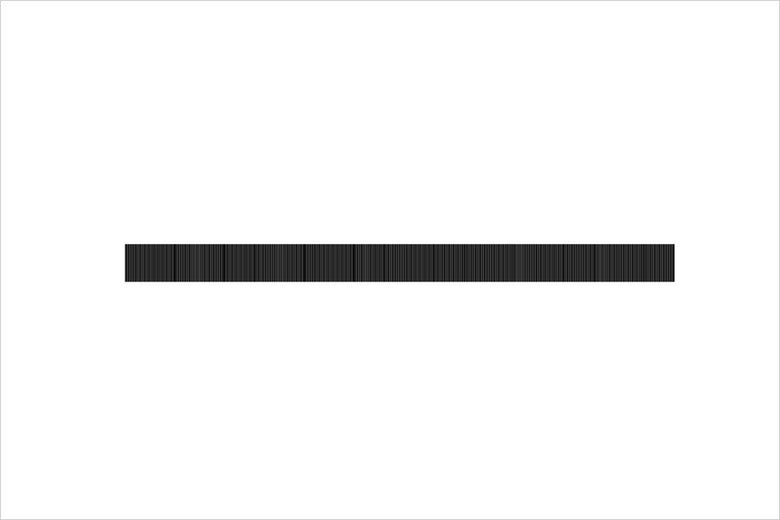 Here’s a beautiful fact, a bit too hard to prove here: You won’t find any better rational approximations to φ than the ones the Fibonacci sequence provides. In fact, in a way that can be made quite precise (but not here), φ, out of all numbers, is the one that’s least well approximated by fractions; it is, in this sense, the most irrational number. That, to me, is golden.