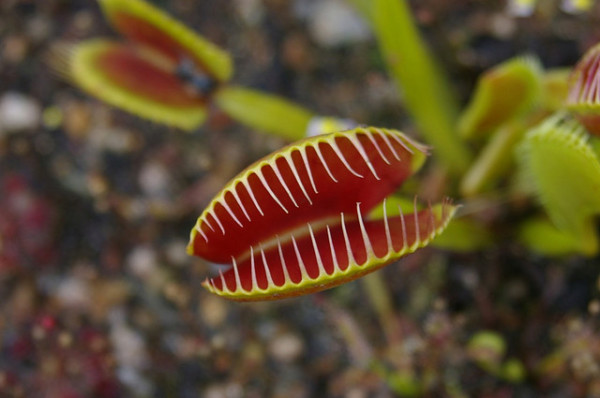 (Image: "venus fly trap" by Peter Shanks is licensed under CC BY 2.0)

We have to admit, we thought we were dreaming when we came across the headline Venus Fly Traps Use Counting To Identify Prey. Turns out, counting is the key to this carnivorous plant's notoriously quick reaction time, allowing it to ensnare the unsuspecting insects on which it feeds!

Per Tech Times, "Once the insect has brushed up twice against the trigger hairs in the plant's mouth, it snaps shut in a fraction of a second. This is done via electrical impulses called 'action potentials' or 'APs.' Two APs within about 20 seconds, and the plant identifies its prey as a moving insect, and locks it in for dinner." The insect's struggles then trigger further steps in the plant's digestion process, allowing the plant to extract the nutrients it needs from its meal—nutrients lacking from the soil in which it grows. According to Science Mag, this little plant expends a lot of energy to trap and digest. This method of prey detection helps the venus fly trap conserve its much-needed energy by allowing it to differentiate between something it could actually eat and other (inedible) external stimuli.

This is just one of many awesome ways in which math manifests in nature! Click here to read about the time we found math lurking in our broccoli!