A recent paper set the fastest record for multiplying two matrices. But it also marks the end of the line for a method researchers have relied on for decades to make improvements. 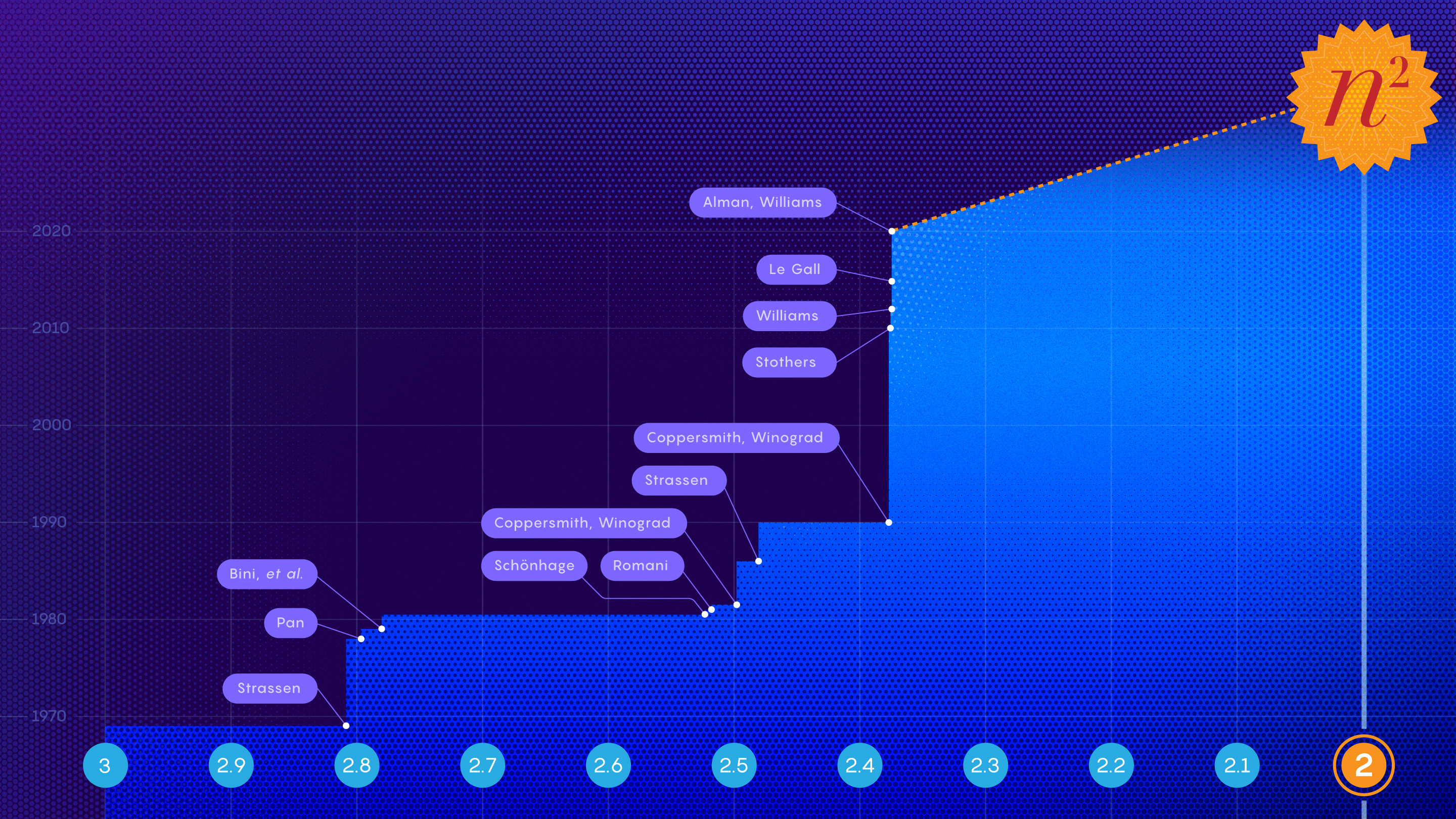 Mathematicians have been getting closer to their goal of reaching exponent two — meaning multiplying a pair of n-by-n matrices in only n2 steps — but will they ever reach it?

For computer scientists and mathematicians, opinions about “exponent two” boil down to a sense of how the world should be.

“It’s hard to distinguish scientific thinking from wishful thinking,” said Chris Umans of the California Institute of Technology. “I want the exponent to be two because it’s beautiful.”

“Exponent two” refers to the ideal speed — in terms of number of steps required — of performing one of the most fundamental operations in math: matrix multiplication. If exponent two is achievable, then it’s possible to carry out matrix multiplication as fast as physically possible. If it’s not, then we’re stuck in a world misfit to our dreams.

Matrices are arrays of numbers. When you have two matrices of compatible sizes, it’s possible to multiply them to produce a third matrix. For example, if you start with a pair of two-by-two matrices, their product will also be a two-by-two matrix, containing four entries. More generally, the product of a pair of n-by-n matrices is another n-by-n matrix with n2 entries.

For this reason, the fastest one could possibly hope to multiply pairs of matrices is in n2 steps — that is, in the number of steps it takes merely to write down the answer. This is where “exponent two” comes from.

And while no one knows for sure whether it can be reached, researchers continue to make progress in that direction.

A paper posted in October comes the closest yet, describing the fastest-ever method for multiplying two matrices together. The result, by Josh Alman, a postdoctoral researcher at Harvard University, and Virginia Vassilevska Williams of the Massachusetts Institute of Technology, shaves about one-hundred-thousandth off the exponent of the previous best mark. It’s typical of the recent painstaking gains in the field.

This operation is known as taking the “inner product” of a row with a column. To compute the other entries in the product matrix, repeat the procedure with the corresponding rows and columns.

“Multiplications are everything,” said Umans. “The exponent on the eventual running time is fully dependent only on the number of multiplications. The additions sort of disappear.”

For centuries people thought n3 was simply the fastest that matrix multiplication could be done. In 1969, Volker Strassen reportedly set out to prove that there was no way to multiply two-by-two matrices using fewer than eight multiplications. Apparently he couldn’t find the proof, and after a while he realized why: There’s actually a way to do it with seven!

Strassen came up with a complicated set of relationships that made it possible to replace one of those eight multiplications with 14 extra additions. That might not seem like much of a difference, but it pays off thanks to the importance of multiplication over addition. And by finding a way to save a single multiplication for small two-by-two matrices, Strassen found an opening that he could exploit when multiplying larger matrices.

The next big improvement took place in the late 1970s, with a fundamentally new way to approach the problem. It involves translating matrix multiplication into a different computational problem in linear algebra involving objects called tensors. The particular tensors used in this problem are three-dimensional arrays of numbers composed of many different parts, each of which looks like a small matrix multiplication problem.

Matrix multiplication and this problem involving tensors are equivalent to each other in a sense, yet researchers already had faster procedures for solving the latter one. This left them with the task of determining the exchange rate between the two: How big are the matrices you can multiply for the same computational cost that it takes to solve the tensor problem?

“This is a very common paradigm in theoretical computer science, of reducing between problems to show they’re as easy or as hard as each other,” Alman said.

Over the last few decades, every improvement in matrix multiplication has come from improvements in the laser method, as researchers have found increasingly efficient ways to translate between the two problems. In their new proof, Alman and Vassilevska Williams reduce the friction between the two problems and show that it’s possible to “buy” more matrix multiplication than previously realized for solving a tensor problem of a given size.

“Josh and Virginia have basically found a way of taking the machinery inside the laser method and tweaking it to get even better results,” said Henry Cohn of Microsoft Research.

The paper improves the theoretical speed limit on matrix multiplication to n2.3728596.

Yet for all the jockeying, it’s also clear this approach is providing diminishing returns. In fact, Alman and Vassilevska Williams’s improvement may have nearly maxed out the laser method — remaining far short of that ultimate theoretical goal.

“There isn’t likely to be a leap to exponent two using this particular family of methods,” Umans said.

Getting there will require discovering new methods and sustaining the belief that it’s even possible.

Vassilevska Williams remembers a conversation she once had with Strassen about this: “I asked him if he thinks you can get [exponent 2] for matrix multiplication and he said, ‘no, no, no, no, no.’”