Math in Nature: A Prime Life Cycle for Periodical Cicadas! 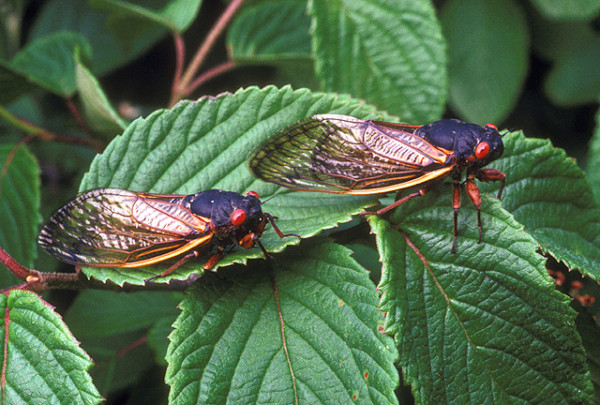 We’re always tickled to see unusual instances of math in nature, and this headline certainly had us grinning from ear to ear: Periodic Cicadas are Coming: Mathematical Bugs in the Prime of their Lives! While many 17-year-old humans spend springtime closing the books on high school, billions of juvenile cicadas are coming of age after 17 years spent maturing underground and leaving their subterranean burrows en masse!

Periodic or periodical cicadas are unique in that they have life cycles of either 13 (cicadas in the Midwest and South) or 17 years (cicadas in the northern U.S.). 13 and 17 are both prime numbers—as we mentioned here, a prime number is a whole number with exactly two distinct factors, namely 1 and itself. Interestingly, the article cites cicada research based on math models conducted by mathematician Glenn Webb, who “created a study in which he chose non-prime numbers, such as 10, 12 and 15, for the life cycles to see if the cicada population would be at a disadvantage. At those intervals he found that the cicada population would be ‘annihilated or significantly reduced.’” Clearly, the math works to the cicadas’ advantage!

Why prime numbers though? This video explains it beautifully (and is full of other fun cicada facts too):

Per Wikipedia, periodical cicadas are grouped into broods based on the year they’re scheduled to emerge. They burrow into the earth almost immediately after hatching, which means that this batch has been biding their time underground since 1999! There can be multiple species of periodical cicadas represented per brood—all synchronized on the same prime life cycle. Once above ground, the cicadas have about four to six weeks to stretch their wings and lay eggs, at which point their life cycles come to a close. While many will fall prey to voracious wildlife, there’s safety in numbers. Due to the huge volume of cicadas emerging at any given time, more than enough cicadas will stay alive long enough to lay eggs and ensure subsequent generations!

This spring, are the cicadas coming to your town? The resources on CicadaMania.com will help you find out. And if they are, don’t worry! While they make a lot of noise and their numbers may be intimidating, cicadas feed on plant sap and are harmless to humans and animals.